After playing in New Mexico under Warrior coach Vladimir Hartinger, Weaver played 3 years of AAA in Colorado, two of which were with the Tigers AAA organization in Colorado Springs.  Nick transitioned to Tier 3 Junior Hockey, playing for the Boston Junior Rangers EHLP team in 2018, where he shared the teams top three scoring spots with New Mexico teammate Matthew Orlando.  This season, Weaver continued with the Boston Junior Rangers EHL team, and has become a product of the high-level development of the EHL league, boasting the highest percentage of player college commitments in any USA Hockey Junior Hockey League.

About being a Raven, Nick stated "I am excited for the opportunity to be a Franklin Pierce Raven, and to have the ability to get a high quality education, while continuing to develop in the game I love.  I would like to take the opportunity to thank the coaches and organizations that have impacted my development.  New Mexico Coaches Vladimir, Kelly and Todd all played a role in my early years.  Coaches Holmstrom and Cody of the Tigers helped me step to a higher level of play.  Coaches Coiner and DiCaprio have played a critical role in my success.  Most of all, I thank my parents and my sister for their part in helping me reach my goals."

This season, the 19-year-old Santa Fe native is again the lone player from New Mexico, now playing in the Western States Hockey League (WSHL) for the Idaho IceCats.

The IceCats have long been a top-tier franchise in the WSHL and Martin is reaping the benefits playing in McCall, Idaho. As of early March, the IceCats had run away with the Northeast Division title and finished the season 44-4-3. This weekend, the IceCats will play the Lake Tahoe Icemen for the Northwest Division championship and a berth to the WSHL finals.

Martin compiled 18 goals and 42 points in 44 games during the regular season.

“This season has been a lot of fun and luckily, I’m on a great team with a lot of awesome guys who all want to win a championship,” Martin said. “Last season was a rough year for playing time, and I realized I needed to play more in order to develop as a player. Luckily, I came in contact with (Idaho coach) John Olver. He is the best coach I have had during my career and has helped me to make some big changes to my game.”

Martin played 20 games for the WHL’s Red Deer Rebels in 2016-17 before finishing the season with the NAHL’s Austin Bruins.

“Red Deer was a great experience and I learned a lot from being a part of such a professional organization,” said Martin. “Playing with and against some of the world’s best prospects gave me a lot of insight into what it takes to be successful. My favorite part was getting to live in a country that lives, eats, and sleeps hockey.”

Martin has played hockey since he was five after his father, Ray, asked him if he wanted to give it a shot. And so it began in the Land of Enchantment.

“After my first couple strides, I immediately fell I love with the game,” Martin said. “The most memorable team I played for in New Mexico was the Warriors. Vladimir Hartinger was the first real coach I had and looked up to, and I give him a lot of credit for where I’m at today.” 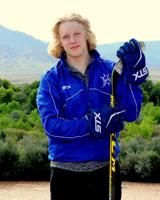 Matthew Orlando played under coach Vladimir Hartinger his last few years in New Mexico.  During the 14/15 and 15/16 season, Matt moved to play Skipjacks hockey out of the USPHL.  After 2 years, Matt was selected to play for the Tigers U18 AAA team out of the North American Prospects Hockey League.  Matthew is excited to play closer to home, and is excited to be playing with a few New Mexico teammates. 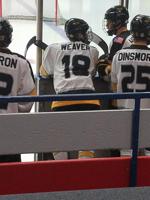 Ist, 2nd and 3rd Place Wins for All the Warrior Teams!

CONGRATULATIONS U12 Warrior Champions at the Littleton Slapshot Tournament

WARRIORS U12 and U14 AT FRIGHTFEST IN LITTLETON, CO